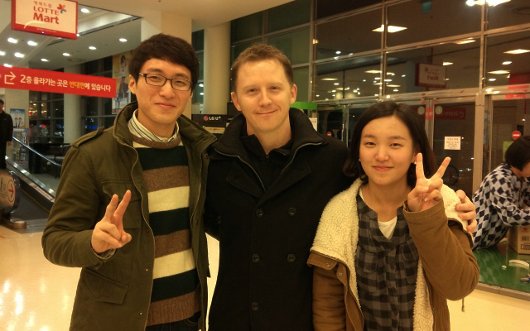 I came to South Korea around mid-September with my heart set on becoming fluent in the Korean language by spending every single day actively immersed in it.

Korean is listed alongside Arabic as one of the most difficult languages to learn for English speakers (according to the FSI), and since I’m already a fluent Arabic speaker I want to prove that Korean is just as possible as any other language to learn with the right motivation and method.

You don’t have to be in the country to learn the language (as I proved with Irish) but being here in Korea has helped me move a lot faster toward my goal. So much of what I’ve picked up so far has come about by being surrounded by Korean speakers for nearly all of my waking hours.

Even though there are days where I’m mentally fatigued and the last thing my brain wants to do is try to learn something, I’m fortunate enough to soak up new words and expressions from the Korean children I teach and my co-workers, as well as people in shops and at the gym.

Immersion undoubtedly has its benefits.

I’ve already made quicker progress with Korean than I had with Irish at the 2 month mark, meeting with my Korean friends every weekend and a private teacher on Friday mornings. My teacher spends an hour talking to me in Korean and then showing me better, more natural ways to say things which gives me something to work on until our next lesson.

Last week we covered all the vocabulary and expressions related to hairdressing (styles, length, etc.) and then I went and got my haircut shortly after which gave me a chance to activate everything we covered by putting it to use straight away (plus make a few new hairdresser friends as well :)).

Even though it’s still pretty slow, my Korean conversations are happening much more naturally and with little need to go back to English (or give up entirely). There’s still a very long way to go though.

I’ve also decided to register for a TOPIK test early next year which will serve to push me even harder to achieve the best grade possible (the test is similar to a CEFR grading test so I’ll have some proof on paper of my progress). Having that as a short-term goal should increase my productivity and give me something serious to work toward over the next few months.

I encourage you to set yourself short-term goals like this as well to really force you to stay on target and reward your efforts.

Note: Video updates are coming shortly. I’ve been insanely busy the last two weeks so I haven’t had time to edit and upload them.

Why I distant myself as much as possible from most expats

Here’s a pet peeve of mine.

The amount of expats who have been living here in Korea literally for years and still don’t speak much or any Korean is frankly shameful.

If you live long-term in a host society – no matter where it is in the world – it’s a sign of respect to make some kind of effort to try to learn the language and try to take part in the local culture.

There’s a real tendency here (and I’ve had issues with the same thing in Egypt and Georgia) for Westerners to live a totally parallel existence to the host society. They work with the locals sure but they spend all their downtime with foreigners and quite often bitch to each other about the host society and culture that welcomed them.

I’ve already queried a handful of expats here who have been in Korea for a few years now on why they have little interest in making Korean friends or trying to learn some Korean, and all I hear are excuses such as “I just don’t have time.”

I realize that foreign languages aren’t everyone’s cup of tea but even a small bit of effort goes a long way.

Hanging out with these kinds of expats is a great way to get nowhere with the local language.

Even though it can be tempting at times to hang out with your own people all the time (especially if you’re homesick or frustrated at work), I strongly recommend focusing on making local friends if you’re serious about becoming fluent in the language as quickly as possible.

With the new language comes a new personality that is a reflection of you through a new cultural self (sounds a little abstract I know).

You could say that a polyglot (multilingual person) has split personalities in this respect.

When I learned Arabic, I aimed to connect with and try to inherit every aspect of Egyptian culture. I aimed to get as close to being Arab as a non-Arab could get.

On a language level I was determined to learn the jokes, slang, idioms, and pronunciation as best as I could. Along with that I made it my business to follow current affairs, TV shows, literature, films and songs (I probably know more about Egyptian TV and music celebrities than English ones now).

With Irish I’ve been doing the same over the last year and now Korean as well.

To truly succeed you need to eat, sleep and breathe your target language AND its culture, and in a sense strive to be one of its people.

One excellent example of someone who has excelled at this in my opinion is Alex Ristich (active over at LingQ and on YouTube). This guy has been a bit of an inspiration to me since I started learning Korean – not just because he learned Korean but because of the way he’s really mastered Korean-ness.

It’s that ‘-ness’ element there that really separates the brilliant learners from the ordinary ones.