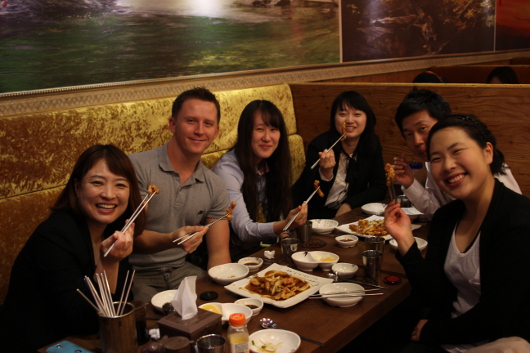 I’ve been in South Korea on a challenge to become fluent in the Korean language for a little over 3 weeks now.

With today’s post comes my very first progress video in Korean – of course it’s really slow and full of mistakes but I’m determined to show you the ‘warts and all’ stages as I (hopefully rapidly) improve in the language.

I won’t be editing out any of my mistakes or reading carefully scripted dialogue in these videos but will upload simple, off-the-cuff monologues and conversations so I can be as transparent as possible about where I’m at.

These progress videos are actually more for my own benefit as I’ll be able to look back in 6 months time (as I did with Irish) and see how far I’ve come.

I encourage all of you to keep a video or audio record of your own progress too!

Note: I always welcome and appreciate advice and constructive criticism from experienced learners and native speakers. Use the comment section below.

Scroll down for an additional video of me hanging out with my new Korean friends. 🙂

Hangul (Korean script) is a lot easier than it looks

I have to admit that before I started learning Korean, I actually thought that it used a character-based writing system like Chinese or Japanese.

I was completely ignorant of just how different Korean actually is.

Korean letters can be easily mistaken for Chinese and Japanese characters and in fact I’m sure that many people wouldn’t know there’s a difference.

Thankfully its writing system is nowhere near as complicated as I originally thought! 🙂

Korean uses its own alphabet (hangeul) and while it is written from left to right, it has a unique way of organising its letters into syllables where consonants and vowels are neatly arranged in blocks.

Here’s my name written in Korean as an example (do-no-ban):

This tribe in Indonesia actually thought the Korean alphabet was logical enough to adopt as an alternative to the Latin alphabet:

There’s so much available online for people wanting to learn hangeul but check this out for a good place to start. 🙂

Have you ever seen this experiment before?

Why Yuor Barin Can Raed Tihs

We don’t actually read every letter of every word in our native language. Our brains recognize the length and shape, along with the first and last letter of the words we read.

You don’t pay much attention to the individual letters when you read which is why you can read so quickly in your own language.

A familiar written word is actually a picture that you’ve seen a multitude of times – you know it instantly when you see it without needing to read it.

When we start out with a new language, we meticulously go through every letter because our brains aren’t familiar yet with the shape and pattern of the word.

Take the name of the city I’m living in for example: 구미 (Gumi).

I’ve seen it so many times on public transport and around town already that I don’t read it anymore – it’s a picture that I instantly recognise now.

I’ve learned 7 non-Latin alphabets/writing systems and some of them have been a bit trickier to pick up than others because it can be tough to distinguish between letters that look so similar in shape and position – especially when we’re not used to seeing them.

Your eyes need to be familiarised with the foreign script and this takes time.

One thing I advise you to do early on is to be always taking time out just for reading practice and sound out the letters as you go – even if you don’t understand what you’re reading.

Practice on restaurant and shop signs, notices, labels and so on or if you’re at home, practice sounding out the script by reading web sites.

Focus on memorizing the whole word (remember it as an image rather than small pieces) and avoid relying on transliterations! 🙂

Get used to the script as it’ll help you work through your conversational resources a lot faster.

I obviously still have a long way to go.

I’ve started to make local friends too (see the video below) and I’ve been making every effort to avoid hanging out with foreigners in my spare time (I’ll be writing about this in detail shortly).

As I work a normal, 8 hour a day teaching job things have been pretty hectic over the last couple of weeks especially as I’ve been trying to get settled into my place and adjust to the new country.

Over the coming months I hope to spend more time working on this site to make it a more useful and interesting resource for language learners so keep checking back, subscribe to my YouTube channel and definitely friend me on Facebook! 🙂

For anyone interested in learning a bit about Korean culture and food generally (from other foreigners in Korea), check out KoreanClass101 and their awesome videos too.