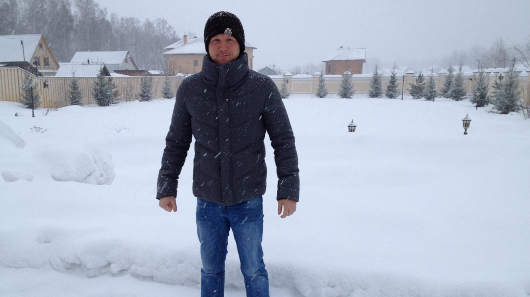 I’ve now been in Russia for just over a week and so far it’s been a great move coming here.

As an Aussie from the coast of sunny Queensland where I pretty much only wear shorts and t-shirts in Winter, this land-locked, frozen city is taking a bit of getting used to but I’m loving it!

Because of my demanding schedule here, I haven’t seen too much of the region yet but I’m lucky to have lots of doors opening up to meet new people already – all of whom don’t speak English. Even though I’ve only been studying Russian for a week and a half so far, the amount of conversation practise I’ve had with native speakers has already been far more than I had in my first month in Korea.

I’m in a region of Russia called Tatarstan where the native language of the area is closely related to Turkish and still spoken by many people at home (and taught in schools) though Russian is the dominant language. As interested as I am in the Tatar language, I’m focusing entirely on Russian for the time being.

If I’m still here in Summer I’ll be heading up to the Kola Peninsular to spend time with the Saami people where I’ll hopefully have enough Russian to use as a bridge to learn some of one of the local languages up there too which has been on my to-do list for many years.

Failing is not the same as being a failure

I had a real “here we go again” moment when I stepped off the plane here last week.

I’ve become so used to moving to new places where I don’t understand the local language that I mentally prepare myself for the many failures I know I’m about to put myself through.

Those of you who have moved to a foreign country to learn another language know how challenging and exhausting it can be.

In the past week I’ve made a lot of potentially embarrassing public mistakes that a few years ago would have demotivated me a lot (e.g. getting asked questions in the supermarket and at the gym with loads of people standing around and not being able to understand or answer while everyone’s staring and making snide remarks).

It can be pretty intimidating being in those situations (especially in Russia where people come across as much more abrupt than in a place like Korea) but these days I just accept that it’s part of the journey, smile and count it as a necessary bump in the road. 🙂

Failures and mistakes are indicators that you’re on the right track.

If you’re not making mistakes and failing then it means you’re not challenging yourself hard enough – you’re doing what’s comfortable and easy rather than pushing your boundaries.

One piece of advice I can’t stress the importance of enough is to embrace failures. Failing is not the same as being a failure (unless you give up)!

Here’s a video I put together on my first day here. Make sure to subscribe to my YouTube channel if you haven’t already.