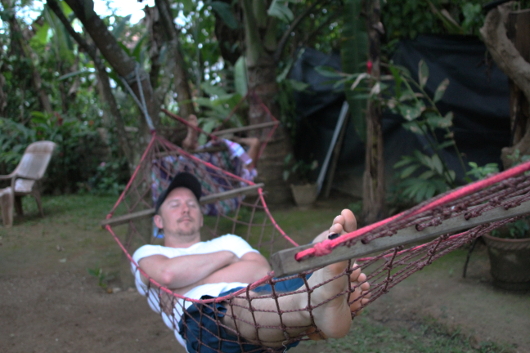 I recently sent out an email asking people what their biggest hurdles are when learning another language and before long my inbox was flooded with responses.

Of all the responses I got from people, you know what the most common problem was?

I half expected to mostly hear things like speaking, listening, learning vocab, overcoming fear, etc. but nope! The majority of people say that they just can’t find enough hours in the day to learn a foreign language.

What I picked up from the emails people sent me was that it’s not just about managing time – for many people the problem is finding it.

You know, it’s a tricky question to offer an answer for because we’re all in a very different boat but I want to ask you a fairly confronting question if you’re struggling to find time around your work schedule for the things you enjoy.

Is it worth it?

If you’re working a job that is so time and energy consuming that you can’t pursue the things that you love or enjoy in life then it’s time to step back and assess whether or not it’s all worth it.

A year ago I was working in Russia as a teacher for one of the top 5 wealthiest billionaires in the country. I had my own modern apartment fully paid, a personal driver at my beck and call, and paid business class flights where I went to parties that only celebrities and elite, mega wealthy people could attend.

I was earning a fortune – more money than I’ve ever earned before in my life.

Sounds fantastic when I tell it like that but you know what happened?

I left mainly because the job was so time consuming that it prevented me from doing the things that I truly love. I went to Russia to learn Russian and experience Russian culture, and instead I was stuck indoors most of the time working a job that I had no passion for at all.

It was just a means to an end.

I found myself miserable and tired at work every day watching the clock for when I got to go home and do the stuff that was important to me.

I was making so much money there that if I stayed even just for a year or two, I could have saved enough to buy a nice block of land back in Australia in cash but I gave it all up because life is too short to be doing things I hate just to make money.

I’ve been in a lot of shitty, draining jobs over the years but I use this one as an example because there was such a big choice between wealth and happiness/fulfillment.

It wasn’t an easy choice either.

Every day of freedom is more precious than gold

These days I earn a fraction of what I made over there but I have a lot more freedom to pursue my passions and keep my sanity (on a shoestring budget).

Now I know everybody’s in a unique position and some people have mortgages, kids to feed and debts to pay.

Just getting up and walking out of a job isn’t an option for everyone (unfortunately many ‘life hacker’ types don’t get this) but why not at least take steps toward moving into something that frees up your life for the stuff that matters – even if it means a pay cut?

Instead of finding time, you’ll be managing time.

Language learning, like so many other things, is a huge undertaking so if it’s something that’s very important to you, don’t just give it the table scraps of whatever’s left of your free time.

In my experience, people getting themselves stuck in these situations comes down to them being slaves to stuff – worthless shit in our lives that we convince ourselves we need.

Just look at all the people who fell over themselves to buy the Apple Watch – another worthless piece of trash that nobody needs! But it’s this kind of nonsense that gets us stuck in horrible jobs paying off garbage that we have no need for.

I believe that so many personal ills in this world – debt, lack of health, lack of time – boil down to people not being able to be content with satisfying needs over wants.

Buy a car because you need something to get you from A to B, not because you want something flash and luxurious that’s going to massively devalue the second you buy it.

I know it’s a bit of a lesson in minimalist living and it takes time to adjust your mindset to but I’m walking proof of the improvements this mentality adjustment can make to a person’s life.

Stop trying to ration the tiny amounts of freedom you have for things that truly matter.

Don’t get to the end and realize you just spent 90% of your life doing things you hated, and regretting that the remaining 10% of your time wasn’t enough to pursue what you love.