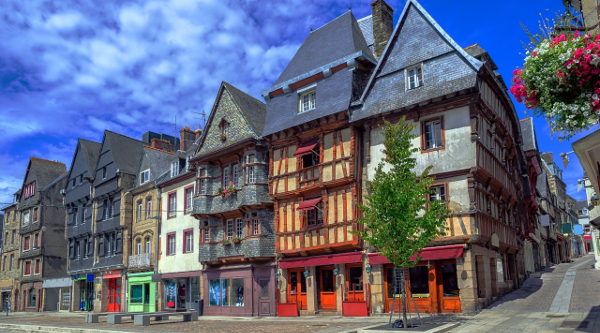 Today we have another guest post by Danielle Swisher.

Danielle has published five books including Murder on O’Hollow’s Eve and Other Short Stories (which is a collection of short stories inspired by her life in France, Boston, Everglades City, Florida and South Carolina), and a poetry collection on love and loss called When You Were Here.

Today she’s adding to her French immersion story talking about how she perfected her French accent. 🙂

During the first few days I started my immersion program at CIEF in 2006, my French was more textbook savvy than practical.

This included my accent which didn’t give me away as an American, but as British.

I remember one occasion in September 2006, when I went to a chocolaterie near Dijon’s Rue des Forges.

I had ordered some almond bark, and ended up staying after my purchase to chat with the proprietors and other customers in French.

Towards the end of the conversation, one of the customers who overheard me asked me:

“Vous-est anglaise?” (are you British?)

I told her the truth:

I didn’t feel bad being mistaken for being British rather than American, but I wanted a real French accent.

I did make a lot of changes in an effort to make any sign of my English-speaking education disappear when I spoke French.

When I made these changes, I wasn’t sure if they’d work. However, in March 2007, I got the biggest compliment of my life while on vacation in Venice. At the time, I was staying in a hostel located across the Grand Canal, overlooking the train station.

A couple from the Normandy region of France had just checked-in, and were benefiting from the complimentary coffee and pastries our hostel offered that morning.

The wife decided to strike up a conversation with me, purely in French. I shall offer a snippet of this conversation (with translations) to show you why it blew me away.

After all, she had no idea where I was from, and she wasn’t multilingual yet this conversation changed my life forever.

Here’s how it went:

When she asked me what region of France I was from, I just about flipped out! By this time period, I had lived in France for about seven months.

I have known people who have lived in the United States for years, including my maternal grandfather (whom I never met however I know this from oral family history) that never lost their accents.

I had always worked with the goal of losing my American accent with Spanish and French, but never had anyone mistake me really for a native speaker in such a workaday way as this woman from Normandy did that fateful morning.

This question was so out of the blue for me, I wasn’t sure how to answer! I finally told her the truth, as I did for that customer back in Dijon six months earlier, but with more detail:

(Uh, I am American, Madam, from Florida in the United States in reality! However, I have been living in France for the past seven months. First I lived in Dijon and now in Aix-en-Provence in order to study French.”)

Her response, and the look in her face was priceless. Her eyes widened with bewilderment and surprise.

This was reflected in her voice when she told me:

You can probably imagine what I felt when this woman I had just met, a native French speaker, told me that she found my accent to be so flawless, that there’s no way I could be mistaken for a foreigner.

This warmed my heart, showing me that the changes I had made really worked.

So, what did I do, you are probably wondering?

One way to pronounce better and get rid of your native language’s accent when you speak a foreign language is just to listen to the differences.

How I listened more was that I listened closely to the people I spoke with, to the music CDs, radio stations and television stations I listened to, and to how my teachers spoke. When I listened more, I was able to hear how French native speakers pronounced certain words and letters.

In regards to mimicking, I mimicked not only sounds.

I also mimicked the way I moved my mouth, positioned my tongue and my lips – even body language.

After all, a great pastime in France is to people watch. 🙂

One of the greatest tools I used for learning French was just to watch native speakers interact with one another.

I listened to their pronunciation, intonation, and also watched how they greeted and parted from each other. I watched how they reacted when they talked about certain things in regards to facial expressions and body language.

I also watched what their mouths looked like when they pronounced certain words, and said certain phrases.

These things I observed, I mimicked and adapted with my own efforts to speak French.

However, it took more than just mimicking, listening and watching what native speakers did differently from me. It also took practice, which is the fourth thing I changed.

I practiced using these techniques, sometimes for hours in front of the mirror, and/or with a recorder. This is an old musician’s trick, something I learned in my efforts to master the violin and piano.

I also thought the sounds in my head while reading and writing.

These techniques work with languages too – more so than I ever thought until I met that couple from Normandy.

It took all of these changes to make what happened that fateful March morning in 2007 possible.

They’ve stuck: I still get confused as a French citizen by every native French speaker I encounter.

Non-native French speakers who overhear me speak French, immediately ask me if I’m from France, or they tell me:

“You speak English very well. Where did you learn English?”

I am currently applying these techniques towards learning German and Polish. So far, I haven’t had a negative critique on my accent, nor on my speaking abilities even though right now, they are limited.

You can incorporate these changes into your daily language learning.

What it takes to make that happen though is to know how much of your native accent is showing through while you speak your foreign language. Therefore, if you are corrected by a native speaker on pronunciation, don’t feel bad.

They are truly helping you to speak the language well and taking their critique to heart is something you just need to practice.

Take it as a challenge, not as a bullying session.

See it as a chance to better observe and start practicing what you need to in order to correct your pronunciation so that you can get your own “du quel region est-vous?” inquiry one day.