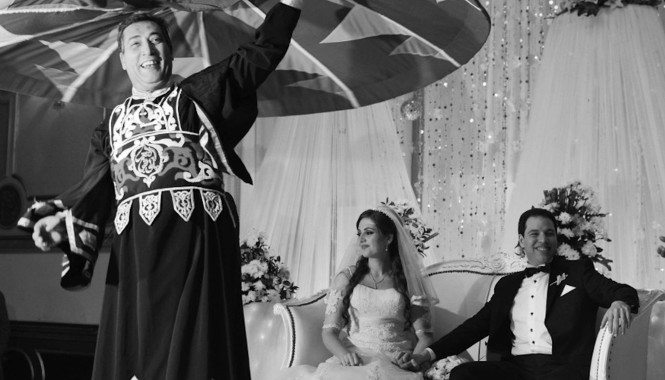 In May of this year, I went to an Egyptian wedding.

It was a German friend that I had played Frisbee with in Cairo. He was getting married to his Egyptian girlfriend of two years.

In fairness, this means it was only a “half Egyptian wedding.”

Still, the overall vibe was definitely not German.

I had attempted an Egyptian Arabic immersion project before this trip to Cairo, and even though I technically failed, it was definitely enough to get me ready. I had previously lived in Cairo for three years, and this wedding was one of my major tests to see if I had forgotten my hard-won language skills.

The wedding was awesome, and throughout the night, I spoke a ton of Arabic with hardly any problems.

Here are five takeaways from my experience.

Use them as you see fit in your own Arabic language learning journey.

1. Egyptians are generally surprised when a foreigner speaks Arabic

The overall disbelief of a foreigner speaking Arabic was kind of something I had forgotten about.

I’d walk up to an Egyptian at the wedding and strike up a conversation, and inevitably, there would be a bit of shock.

I really don’t look Egyptian, and being one of the few non-Egyptians there made me stick out even more.

Of course, speaking Arabic for me wasn’t that big of a deal. I had done it for three years in college (Standard Arabic, which didn’t really help a lot), and had lived in Cairo for three years.

I also still keep in contact with quite a few Egyptians, and we chat frequently over WhatsApp and Skype.

But the wedding made me realize something important: it’s weird for them.

And that’s a valuable lesson that I think is important to learn.

The fact is, some languages are a bit more “strange” for non-native speakers to speak.

If you speak a dialect of Arabic, it’s almost guaranteed: it’s going to be a bit strange for non-native speakers the first time you talk to them.

But strange in a good way.

You, as a non-native speaker of Arabic, are a rarity.

Give yourself credit, accept any confusion regarding your language skills, and keep on talking.

Any (probably good-hearted) laughter or dreaded “switches to English” aren’t because your Arabic isn’t good.

Much more likely, you’re just a weirdo for being one of the few foreigners that can actually hold a conversation in Egyptian Arabic.

I have this tendency to get stressed out speaking foreign languages.

I get caught up in my head, over think what I want to say, and then end up keeping my mouth shut because I don’t want to make a mistake.

I know how destructive this thought process can be, but I still fall prey to it sometimes.

Thankfully, I had beer at the wedding.

That’s not to say you should rely on alcohol to open your mouth. Definitely not.

Rather, it’s important to remember that relaxation, and being okay with making mistakes, is vital to your long-term success.

Stress and anxiety can only derail your speaking efforts.

The most successful “language speaking nights” I have, regardless of the situation in which I’m using the language, are the ones where I’m the most relaxed.

Relaxation creates a calmed mindset, which in turn sets you on the path to language success.

I could have placed all this artificial pressure on myself to speak Egyptian perfectly, but I didn’t. I just wanted to talk.

And that made everything so much easier.

So do whatever you need to do to relax before you speak a new language.

Whether that’s a beer, laughing at yourself a bit more, or whatever positive self-talk you need.

It’s really easy to get lost in “busy work” when you are learning a language.

Much more difficult (and much more time-efficient) is to actually USE the language.

Being at an Egyptian wedding, with no vocabulary cards to accompany me, and speaking real Egyptian Arabic to real Egyptians, reminded me of this.

Sure, you could sit in your room all day and study verb conjugations.

You could watch every single show online that’s available in your target language.

You could hide behind an app and convince yourself that “you’ll speak when you’re ready.”

But the simple truth is, none of these things are getting you substantially closer to what is (probably) your main goal: speaking.

Certainly, these sorts of study activities have their place and time.

Grammar, listening comprehension, and vocabulary are all things that you can (and should) study.

But language learners do it too much.

They develop the thought pattern that they are “doing enough,” and that the day will come when they wake up and can magically speak their target language fluently.

Simply put, they give themselves any excuse to avoid the awkwardness of speaking.

And that’s a mindset to be avoided at all costs.

It’s going to be awkward. If you aren’t yet at a high enough level, that’s almost guaranteed.

If you main goal is to speak a language (which is often the primary goal of language learners everywhere) you just have to do it: speak.

Thankfully, I had plenty of opportunities at this wedding. There were Egyptians everywhere and plenty of room to chat away.

These are the moments when “academic practice” can take a back seat.

These are the moments where you see how worth your time all those hours are.

Just make sure you are speaking fairly early on.

4. Make sure you’re having fun when learning Arabic

This could have just been the unlimited amounts of beer, but the Egyptian wedding was about eight hours straight of laughing.

I was surrounded by friends I hadn’t seen in almost a year, speaking a language I love, dancing the night away to a mixture of Egyptian Shaabi music and American rap.

But this tip is so much deeper than that.

Learning a new language to a high degree of fluency is an adventure in and of itself.

Try your hand at Arabic, and the difficulty only increases.

You really do yourself a favor when you stop taking things so seriously.

Whether that’s enjoying the process of learning in the first place, or approaching your countless mistakes with a general sense of optimism.

You’re going to make mistakes. This is essentially unavoidable.

Best to smile every time you do rather than get upset about it.

While this is quite similar to tip #2 about relaxing, you could also say this piece of advice shows you something else, as well: it’s super important when learning a language to do something that you love.

Or at least something that you relatively enjoy.

I love talking to people in a different language.

This wedding was an exciting opportunity to do something I love, and as a result, practicing my Arabic was not just a chance for improvement but a chance for fun.

At the end of the day, there’s no use getting really good at something if you hate the process.

Can’t get enough of reading?

Then go buy some books in Arabic.

Don’t let this get in the way of actually using the language (see tip 3), but for Heaven’s sake, you have to have fun.

Learning a language should have a healthy dose of “enjoying yourself,” and a little bit of fun can go a long way in keeping yourself motivated.

This last one isn’t strictly “language-related,” but it’s important to know anyway.

Egyptians really know how to party.

Granted, the bride was Christian. The wedding was therefore a bit different than a Muslim wedding would have been.

Still, it had most of the common markings of Egyptian weddings.

If you’ve never been to one, it’s highly recommended.

The wedding ceremony itself was done in about 30 minutes, and then it was straight to drinking.

While this tradition with sparkling wine was German, the Shaabi music that followed about an hour later definitely wasn’t.

And the “Egyptian debauchery” only increased as the night went on.

The wedding was worth it just for that.

It was also on an island in the middle of the Nile (no big deal), so you really couldn’t have asked for a cooler setting.

People tend to view Egypt as some “ultra conservative” country in the Middle East, but it’s not always like that.

This was only one night of my three-week trip back to Egypt, but it was one of the highlights.

Boy, I missed this country.

Overall, my experience speaking Egyptian Arabic at an Egyptian wedding was a positive one.

I had an incredibly fun night of music and friends, and everything was only made better by the conversations I had.

And really, this is what learning a language is all about.

Real experiences, with real people, that highlight a moment of your life that wouldn’t have been possible without the language.

This wedding in Cairo between two dear friends just confirmed what I already knew: fluency in a foreign language is a great facilitator.

A facilitator of fun, human connection, and cross-cultural understanding.

So accept peoples’ surprise that you can speak their language, actually use it if you want to improve fast, relax a little, and have fun while you’re doing it.

Incorporate these tips into your own Arabic learning, and you can’t go wrong.