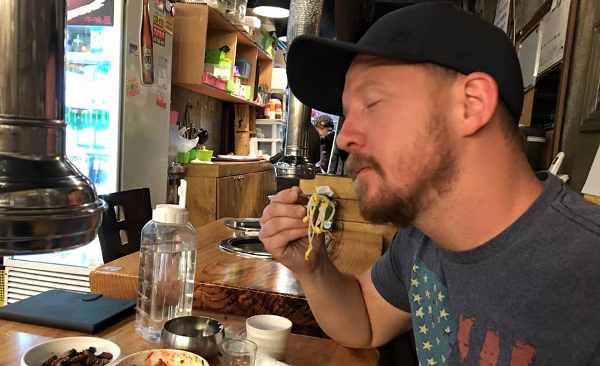 Check out my Essential Language Learning Tools page for recommendations on the best online resources for many languages.

After a tiring month-long visit back home in Australia, the misses and I made a fairly last minute decision to reward ourselves with a visit to Korea en route to the US (we actually met each other here when we both lived here a few years back).

I can’t tell you how good it is to be back in Korea! (^ that’s how happy I was to eat Korean BBQ again) 🙂

Since living in Korea a few years ago, this place has kept a special place in our hearts.

And after putting such a huge amount of energy into learning the Korean language for so long, I’ve wanted so desperately to come back and use it (I haven’t tried to keep it fresh during my travels).

I spent a solid year learning Russian in Kazan in 2014, a few months on Italian while living up on the Swiss border and of course, the rest of the time has been spent on Arabic in the Mid East working on Talk In Arabic so my Korean which I worked so hard on has been left by the wayside until now.

What I’m finding at the moment is that my instinctive reaction most of the time has been to respond in Russian or Arabic when people ask me something in Korean (listening comprehension is fine) so I’m having to take some serious time to fire up the engine again.

It’s so fun to get back into it!

The good news is that because I did learn it so well back in 2013 (I spent an entire year associating only with Koreans in a small town near Daegu), it’s only taking a quick reminder to get it all back.

The better you learn the first time, the harder it is to lose

“I learned a language before but I’ve completely forgotten it now.”

When I hear people say this I always say that it probably means they never learned it well to begin with.

If you learn a language well, it’s always going to be there.

I’m discovering more and more that with languages, the better you learn them the first time, the more deeply engraved in your memory they become and harder to forget (even if you don’t use them for a long time).

This is why I encourage people to focus on one language and learn it extremely well before moving on to another one or trying to learn multiple languages simultaneously.

If you’ve been following my blog for the past 5 years, you’ll know that I tend to choose one new language and spend a year or more totally focused on it and nothing else.

I treat each language like nothing else in the world matters at the time.

That way later on it’ll stick permanently even if I move on to something else for a while.

Even when I feel like I’ve ‘forgotten’ words and expressions, they’re usually just slightly beneath the surface of my memory so a single glance at a word (I’m refreshing my vocab using Memrise at the moment) can bring it all back very quickly.

In the case of Korean, I’ve found that over the last few days it’s taken just a couple of hours of glancing at vocab to get me communicating again.

Keeping a language active is easier than reactivating it

Of course, keeping a language active is a lot easier and more effortless in the long run to do than reactivating it after not using it for a long time.

The trick is to not let it get rusty in the first place! 🙂

I’m realizing now more than ever that if I had of put even 30 minutes a week into my Korean, I’d have no need to reactivate it after being away.

It would remain active because it’s being used regularly.

My Russian and Arabic by contrast never get rusty because I use them regularly enough.

So I’ve decided that in order to do this, from now on I’ll be doing weekly (or at the very least least bi-weekly) conversation sessions on italki with native Koreans to keep it fresh from now on.

No matter where I am in the world.

As an added bonus, I’m lucky because my fiancée learned Korean a few years ago too so we’re both now encouraging each other to keep at it as well as speaking to each other in Korean. 🙂

What this means is that although I’m not currently learning Korean (improving it is just not a priority for me right now), I’m keeping what I do know already in use so that it doesn’t get rusty again.

Regular conversation helps us negotiate meaning which is the most natural way to improve.

Have you “forgotten” a language or had experience reactivating a rusty language?