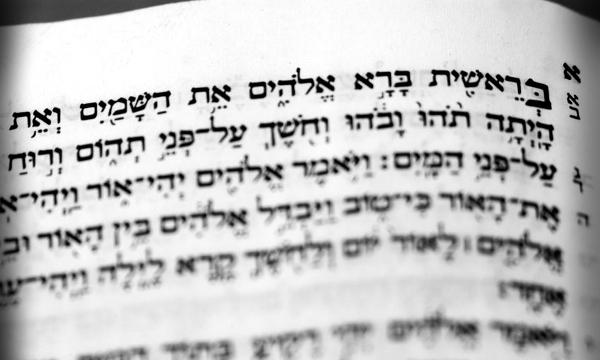 A square script is scary.

It’s probably your first thought when you consider learning Hebrew.

The Hebrew alphabet looks intimidating but many have learned if before and proved it’s possible to master.

This post will provide a breakdown of the Hebrew alphabet.

It’s not a boring list of letters. We’ll take a trip through curious cursive and even some memorisation methods.

Learn the Hebrew script and get equipped to dive deeper into this wonderful language.

Aleph is not just a short story by Jorge Luis Borges and a book by Paolo Coelho.

It’s the first letter of the alpha-bet, which make the character’s name pretty easy to memorise!

For the math-inclined among you, you might already know aleph from set theory, where it represents a specific set of numbers.

So clearly alephs are all around us.

But how do they look like? Let’s see: א 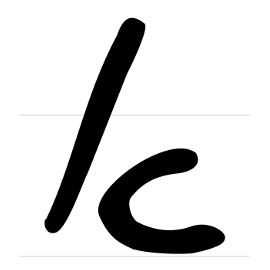 In print, the square script, aleph looks like a wobbly X — a little insecure perhaps?

But who wouldn’t be insecure if they were to open the alphabet. 🙂

In cursive it ended up resembling the combination of letters l + c. 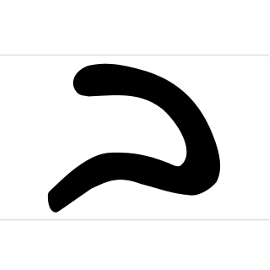 Bet (ב) is, as you’ve gathered, the second part of the word alpha-bet which makes it the alphabet’s second letter.

Because it can also be pronounced “v”, it is also called vet.

Funny one here – the print shape always made me think of a giraffe. 🙂 Once you see the resemblance once you can’t unsee it.

It also seems like I was not the only one to match gimmels with giraffes. 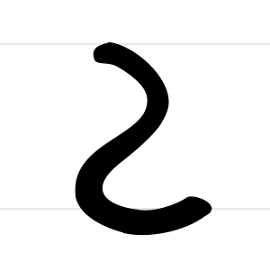 In Hebrew the word for giraffe is exactly the same as in English — just said with an Israeli accent.

So by linking gimmel with a giraffe you won’t be creating a confusing connotation.

The cursive gimmel is a little different — it looks like a hook.

Think of catching that giraffe like a fish on a hook. 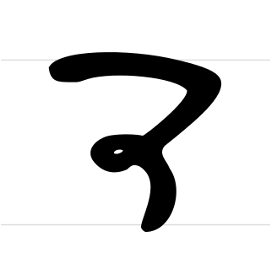 The printed dalet looks like a part of a door frame: ד

Incidentally the word for door in Hebrew is delet, דלת, quite similar to dalet, isn’t it?

The cursive dalt is a little funky — spiralled like a bit of pasta. 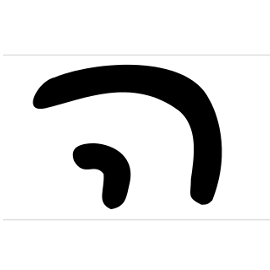 This one always made me laugh.

The name of the letter is often pronounced as hey which helps generate a cheerful connotation.

And you’ll need to be cheerful here because he is also the Hebrew definite article, and using it can be tricky.

Let’s not trouble our heads with this for now though and enjoy the grammatical obliviousness while it lasts.

Here is how we write He (ה): printed looks similar to the cursive version, the latter being a little more curved. 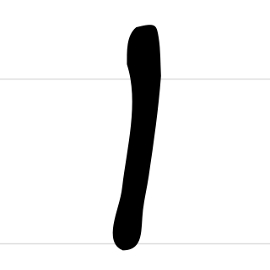 Some pronounce its name as wow.

And it helps that it is actually shaped like an exclamation mark! Just without the dot.

Extra tidbit of information here: vav is also a full Hebrew word, and an important one at that.

You will often see it preceding a he to mean and the. Hey wow! Isn’t that cool? 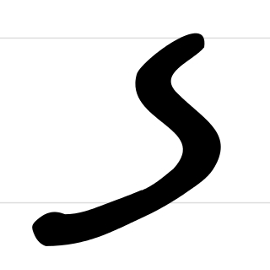 In print it looks like a vav with a little dash on top.

If you add a similar one at the bottom it will actually resemble a “z”, which should make it easier to memorise.

So as you’re learning to write it, don’t be surprised if people giggle when you ask them about the shape of their zayins. 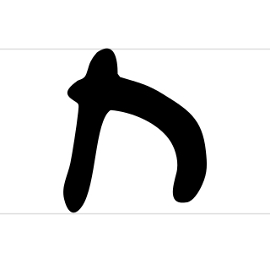 Chet looks very similar to he, but without the gap between the two strokes.

If you think of this letter as a gate, it’s a much stronger one than the insecure, light-standing He: ח

The image of strength matches its pronunciation.

Chet is one of the harsh sounding Hebrew letters originating in the back of the throat. Harsh chet. 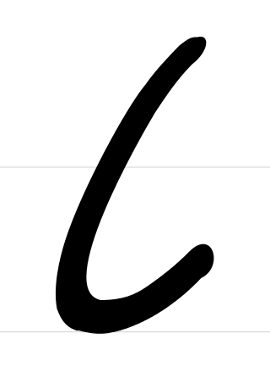 Like a small “t” without the dash, Tet (ט) is one of the two ways to write a “t” sound in Hebrew.

Just like chet it looks almost exactly the same in cursive as in print.

To memorise it think of a thick nose. Tit for tat. Tet for nose. 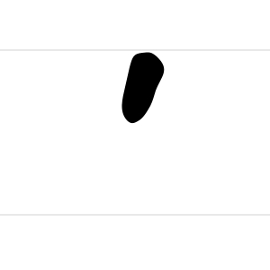 Where are you yod?

You’re so tiny we can barely see you!

Yod is the tiniest letter of the Hebrew alphabet.

Be careful not to confuse it with an apostrophe, a single quotation mark, or …a lost crumb from a burned toast!

If you place two yods next to a letter he, you’ll actually write “hi”in Hebrew:
היי!

And by the same token, guess what you’ll be writing if you add a double yod next to letter bet? Bye! A commonly used parting phrase in Israel. 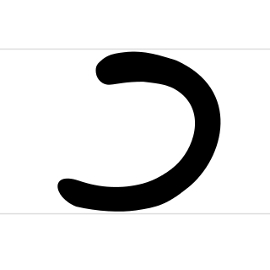 Welcome to your first, Dr. Jekyll and Mr. Hyde of Hebrew letters — a letter with two sides to it.

In most circumstances — at the beginning and in the middle of words — it looks like reversed a “c”: כ

At the end of the words it looks like a cane.

In print it’s a type of cane your grandpa would use and in cursive more like a shepherds crook. Cane, crook, kaph: ך 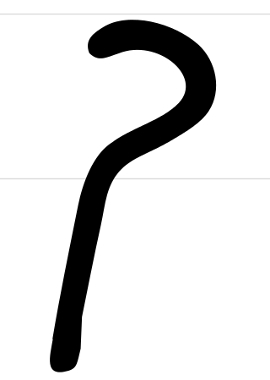 In the beginning and in the middle of the words either as “k” like in the English word character or as a harsh “h” like in the word Hasidic.

This is also the same pronunciation as of the letter chet. 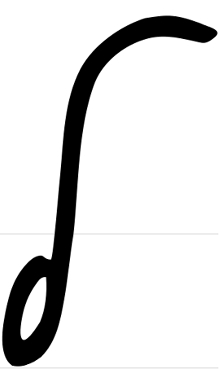 There is no other way of looking at it — lamed looks like lightning: ל

In cursive, lamed is one of the more fun letters to write.

It has a little loop at the bottom, and when you sdd two legs to it and it looks like a f-L-amingo. Or even a f-lamed-ingo. 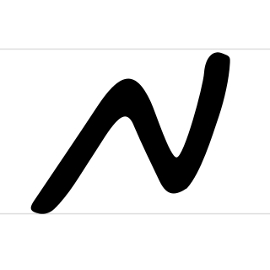 I was tempted to make a meme about it.

Printed mem can resemble a minion pointing an arm up.

Mem is a second letter with a split personality disorder — it appears in two forms. 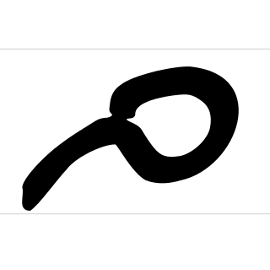 In its final form there is no other way to put it… it looks more less like a square: ם

The cursive version is a little easier. In the main form, if you add an extra “leg”, it almost looks like an “m”.

The final form is like a mirror image of a small handwritten “a”.

Nun (נ) is a little boring to be honest.

As you might imagine the life of a nun would be.

The only excitement to be had is that it also has a final form. 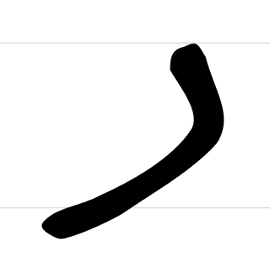 Nothing e-nun-thusiastic to talk about really. 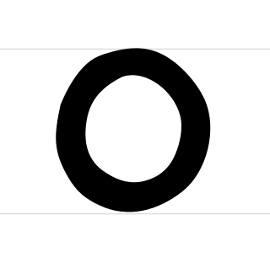 This way of writing the sound “s” in Hebrew unfortunately looks just like an “o” (ס).

Thankfully it’s the same in cursive and print. 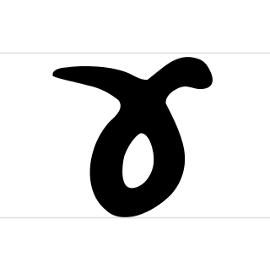 Ayin (ע) stands for one of the Hebrew sounds that is new to many Hebrew learners.

It’s a throat-originating muffled sound of… something almost like choking!

In cursive it looks like an upside-down ribbon, a symbol of support for various causes.

How to memorise it? Ay! in ribbons we trust!

The printed version looks like a flattened letter “y”. a-Y-in. 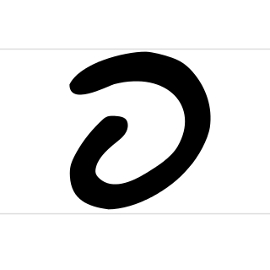 Pretzly-looking pe is delicious in both of its forms.

And no it’s not a mistake, print and cursive have a curl in different places — one curls on the bottom the other on top. 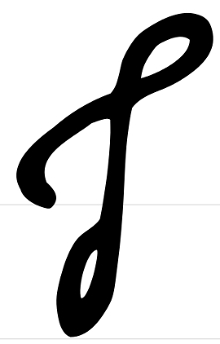 The final form of pe — because this is yet another letters that has a final form — is a little less organised.

Bear in mind pe can be read as “f”, depending on its position in the word and syllable. 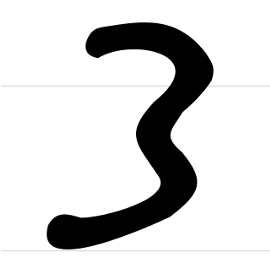 Tsadi sounds like a cicada — it goes tsk, tsk, tsk…

It’s also is a master of mirrors.

To write the final form you’ll be calling up your best calligraphy and coordination skills. 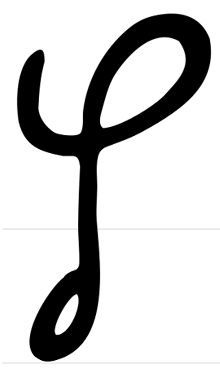 While pe was an unfinished pretzel, final tsadi is a pretzel gone wild: ץ

The final print form looks like a tuning fork. 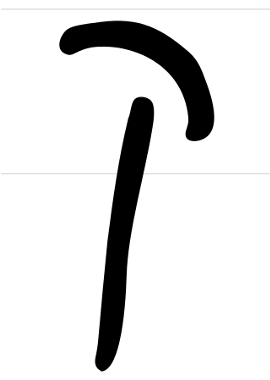 When a squeezed resh sits on top of a final nun we get koph, a letter that stands for the same sound as kaph.

Ok, this is not the most simple of explanations… perhaps it’s easier to just see it: ק

Koph stands for the sound “k”. 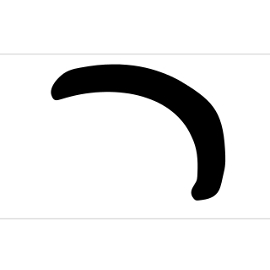 Note of warning regarding print: be careful not to confuse it with dalet!

Rainbowy resh is a curve, while dalet has a clear right angle between the strokes. (ר)

Before we had some sounds that could be symbolised by the same character — like chet and kaph that both can stand for a sound “h”.

We also saw letters which are read differently depending on their position in the words, like pe or kaph.

Now we have one shape that can be read differently depending on nothing more than a gust of wind!

In theory shin and sin will be differentiated through a placement of a dot.

So far so good. 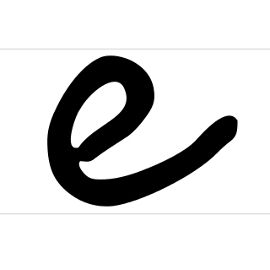 However, these dots will often not be written either in cursive or in print.

The reader is expected to “simply know” what sound to read out — a matter of practice and familiarity with the words.

I still have a problem remembering where to place the dot for shin and where for sin (facepalm).

Here is what I learned though: there is usually no need to remember it (don’t tell anyone I said that).

If in an unvocalised text, you see the one odd dot marked on ש, there is a 99% chance it will be sin.

In cursive the letter looks like… a small handwritten “e”. 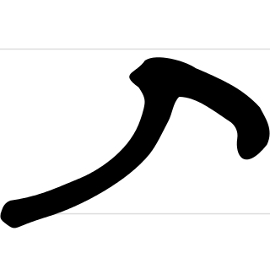 Tav (ת) is not so tough! It looks like a resh with an extra leg.

The cursive version is nothing more than a lazy person writing the above.

But! You aren’t a lazy learner, are you?

What I suggest you do now is reread this post top to bottom with an aim to practice writing all the characters.

Now you know all the consonants.

As you know from my previous post, to mark the vowels Hebrew uses what’s called diacritics.

Diacritics (or diacritical marks) are pretty critical to reading, especially in the initial learning stages. These dots and dashes symbolise the vowels and tell you how to pronounce the words.

Apart from one or two exceptions they are placed under the consonants.

In the old days of grammatical complexity, vowels used to be pronounced differently depending on their length.

There are several different symbols to represent each vowel but — and it will be a relief for you to hear that – in Modern Hebrew the reading doesn’t differ!

The length of the vowels only matters if you’re learning to vocalise texts or are a student of Biblical Hebrew.

This will make our journey through the vowels much quicker.

We can simply divide them into groups, representing each sound.

You deserve a round of applause for getting this far. 🙂

But you’ll be mistaken if you think it’s the end of your journey, and I’m sure you know what the next step is.

Do you think you’re able to write your name now? Try it!