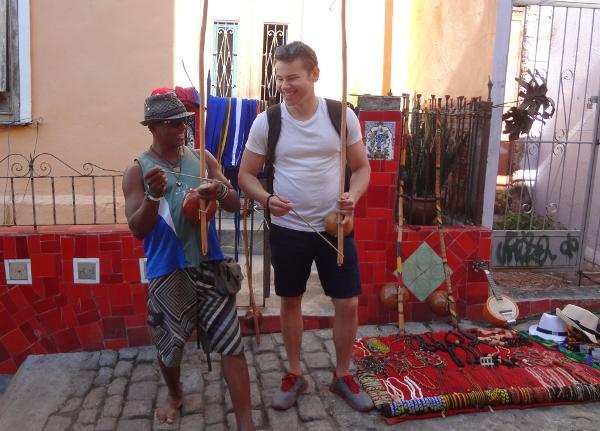 This is a guest post by Nasos Papadopoulos who runs a site called metalearn.

Nasos is challenging himself this year to learn Mandarin and Spanish simultaneously, and wanted to share some his personal goals and strategies with us.

Got a story to share? Send me an email here.

The two most spoken languages in the world are Mandarin and Spanish, with over 1.5 billion speakers between them.

That means that one in every five people on this planet speaks one of these languages.

Wouldn’t it be amazing if you could learn to speak to 1 in every 5 people on Earth in less than a year?

Well, that’s the challenge I’ve set myself for 2016, by learning Spanish and Mandarin simultaneously and documenting the process along the way.

But before we dive into the specifics of the goals in both languages, the methods I’ll be using and how I’ll be measuring my progress, let’s examine a question that’s asked by so many language learners but rarely gets answered properly.

Is it even possible to learn two languages at once?

Learning two languages simultaneously is one of the most controversial topics in the world of language learning.

It’s often associated with the type of ridiculous marketing schemes that promise you six pack abs in 30 days or a 50% IQ increase in a few weeks. Like these empty promises, learning two languages at once just seems too good to be true to many of us.

Whenever I’ve discussed the idea of learning two languages with others the advice has almost always been the same:

“Don’t do that, learning one is hard enough and you’ll confuse them. You’re better off sticking to one at a time.”

Even polyglots and experienced language learners, like Luca Lampariello and Anthony Metivier have spoken about the perils of learning two languages at once and the problems they’ve faced when trying to do so.

In one of the best articles I’ve read on the subject, Luca warns that haste is an enemy in language learning and that learning two languages is often associated with the type of short term thinking that hinders successful language learning.

In a recent podcast I recorded for MetaLearn with memory expert and language learning expert Anthony Metivier, he spoke about his own experience of learning two languages at once and admitted that while he’s managed to acquire vocabulary in multiple languages, he often found the process to be counterproductive.

He felt he constantly had to choose between them when it came to practicing the core skills of speaking, listening, reading and writing, which made the process less enjoyable and unsustainable.

The key thing to note here is that Luca, Anthony and others who talk about the difficulties of this process are not discouraging learners from taking the challenge on – they’re just alerting you to the trade-offs involved with making that decision.

From my own experience at school learning two languages at the same time wasn’t a problem.

From the ages of 13-16 I studied French and Italian at the same time as Latin and Ancient Greek at school and rarely had a problem of mixing up them up or struggling to prioritise between them.

However, studying two languages as an adult while trying to run an online business and work with students as an academic tutor is another proposition entirely.

One of the reasons the process of learning multiple languages at school felt easy was because my time was organised for me and I’d show up to class whether I wanted to or not.

This scheduling process is something that I’ll be trying to replicate in my own study of Spanish and Mandarin so that I stay consistent, even when I don’t feel like it.

That way, I’ll have to fit my other commitments around the challenge rather than sacrificing my learning when the unexpected happens.

Here’s the thing – maybe learning two languages together is a bad idea.

But maybe it’s a good idea.

The only truth is that you’ll never know for sure unless you try it which is why I’m taking on the challenge this year – to find out once and for all.

I’ve never previously studied either Spanish or Mandarin but in the last few months I’ve been feeling an acute desire to study them together.

However, because of the difficulties associated with the process, I’ve stopped short of fully committing to it, telling myself that I don’t have the time or focus to do so.

The way I broke through this was to take a blank sheet of paper and pencil and write down the reasons that were pulling me towards the challenge and those that were pushing me away from it.

Reasons for Doing the Challenge

Reasons for Not Doing the Challenge

This simple exercise was a great way of identifying the limiting factors that were holding me back and forced me to confront them head on, before starting. It also showed me just how much I wanted to take on the challenge and that the reasons for doing it far outweighed those for not doing it.

Here’s what I wrote under the two reasons for not doing the challenge.

Clarifying my motivation has been a hugely valuable activity whenever I’ve done it and has got my learning projects off to a great start as well as being a point of reference to look back on further down the road.

Once I’d clarified my motivation it was time to select some specific and measurable goals to aim towards.

As many of you will know, setting yourself the goal of becoming “fluent” in a specific language isn’t going to work.

We need a clear target to aim at, so that we continue to take consistent action to reach it.

I settled on the following goals in both languages to reach by the end of the year:

These long-term goals are certainly ambitious but I believe they’re achievable with the right organisation and sufficient time dedicated to the languages.

From experience I know that setting very ambitious goals has always worked well for me and I’m confident I’ll be able to rise to the challenge.

How am I doing this?

OK, so now that I’ve set out my motivation and some specific measurable goals, you’re probably asking how the hell I’m going to try and pull this off.

As much as I’d love to, I simply don’t have the time to dedicate myself to this full time in terms of study.

But what I can do is integrate the languages into my life, which I’ll do by applying certain universal principles to both languages.

1) Organisation
The main reason that people fail to stick to language learning goals is that they fail to plan, and failing to plan is planning to fail.

As I’m acutely aware of this, I’m scheduling all of my conversation classes 2 weeks in advance and will be setting aside some time to review my progress at the end of each week.

2) Habit Creation
While it’s important to define your motivation clearly when starting out, this isn’t what get’s the job done on a daily basis.

Motivation is transitory and when it fades your whole study schedule can collapse if you don’t have the right systems in place.

That’s where habits come in and I’m in the process of creating several language learning habits so that I can study without needing to be motivated to do so.

These include spending a minimum of 15 minutes on each language first thing in the morning, drilling my flashcards on Anki any time I’m travelling on public transport and watching at least one interesting video in each language every day.

3) Mental Translation
When I was learning Portuguese in 2014, I’d often pause during my daily conversations in English and try to translate what was being said.

If I couldn’t translate accurately, I’d note it down and look it up later and this proved to be extremely effective in improving my vocabulary and fluency in conversation.

Since I’m learning two languages this time, I’ll be engaging in this process in Mandarin in the morning and Spanish in the afternoon.

This doesn’t mean I’ll be translating every single English conversation in my head while it’s going on, but I will be aware of certain phrases and expressions that I use regularly and might need to use in the target languages.

4) Target Language Activities
When I was learning Portuguese I started taking some Samba classes in London as a way of accessing the culture and meeting other Brazilians.

Doing activities in the target language is essentially a form of temporary immersion and I’ll be doing this for Spanish by attending a Spanish public speaking club and in Mandarin by practicing Tai Chi in a traditional Chinese setting.

Although I’ll only be spending two hours in both per week, it will be a great way to have some real conversations and dive deeper into the culture surrounding the languages.

5) Laddering Languages
Given my background in other romance languages (French, Italian, Portuguese) I should progress much faster in Spanish than in Mandarin.

As soon as I reach a point where I’m feeling comfortable enough in Spanish, I’ll invest in some Spanish language study materials for Mandarin, so that I’m switching between the two rather than going back to English.

That way I’ll indirectly be practicing Spanish when I’m studying a Mandarin grammar or vocabulary book.

6) Pursuing Personal Interests
I see languages as an opportunity to educate myself further and explore my own interests through the medium of another language – that way I’m learning things I’m interested about and am far more likely to stay consistent.

In Spanish I’ll be reading some literature I’ve always wanted to explore such as the novels of Jose Luis Borges.

In Mandarin I’ll be diving deeper into the world of martial arts, by watching relevant Chinese films and reading around the subject.

By applying these universal principles that have worked for me in the past and keeping myself accountable through the blog and video updates, I’m confident I can achieve the ambitious goals I’ve set myself.

There will be ups and downs, successes and failures and times where I’ll want to give up but one thing’s for sure – it’s going to be a blast and I’m looking forward to the journey.

You can connect with Nasos on his site metalearn.